Mexico. Land without chocolate chips or sunglasses. If you think you can find gafas de sol easily in Mexico, think again. Mexicans don’t wear sunglasses! Sharing one pair between the two of us is no way to live. And then the chocolate. In the absence of other desserts, we usually keep chocolate chips on hand for a dose of sweet. The ones we had from Costa Rica lasted until Mexico, where we promptly found out that Mexicans don’t bake with chocolate chips! The avocados, though: plentiful and cheap. Almost makes you forget you’re having sugar withdrawal while squinting into the sun. 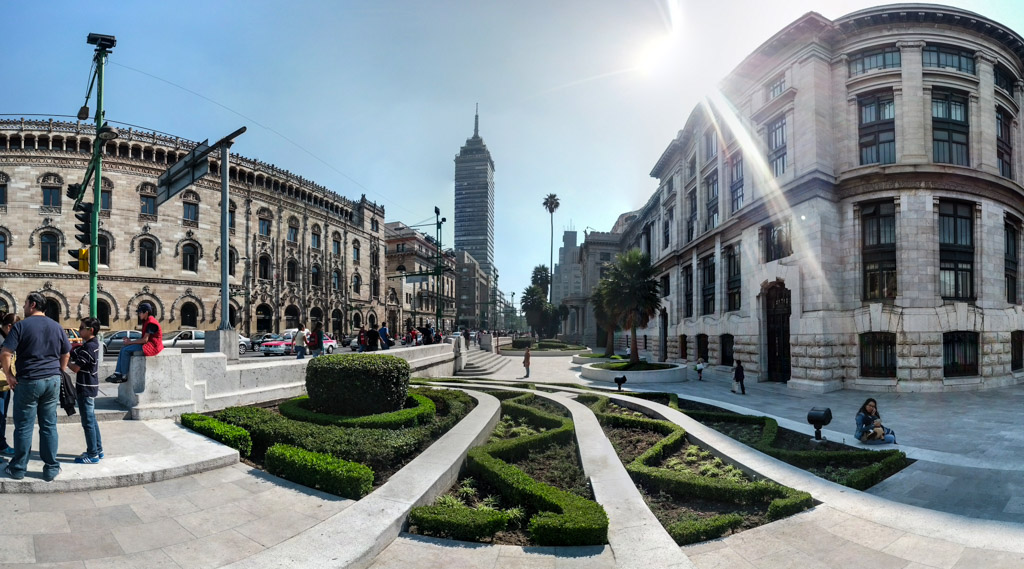 Mexico was the place where the little things started to break down. Mechanically, Bruno has been stellar. The auxiliary battery has trouble holding a charge, but we’ve done well finding interesting camp sites that provide power. Funny how these choices shape the trip, where you end up, who you meet… 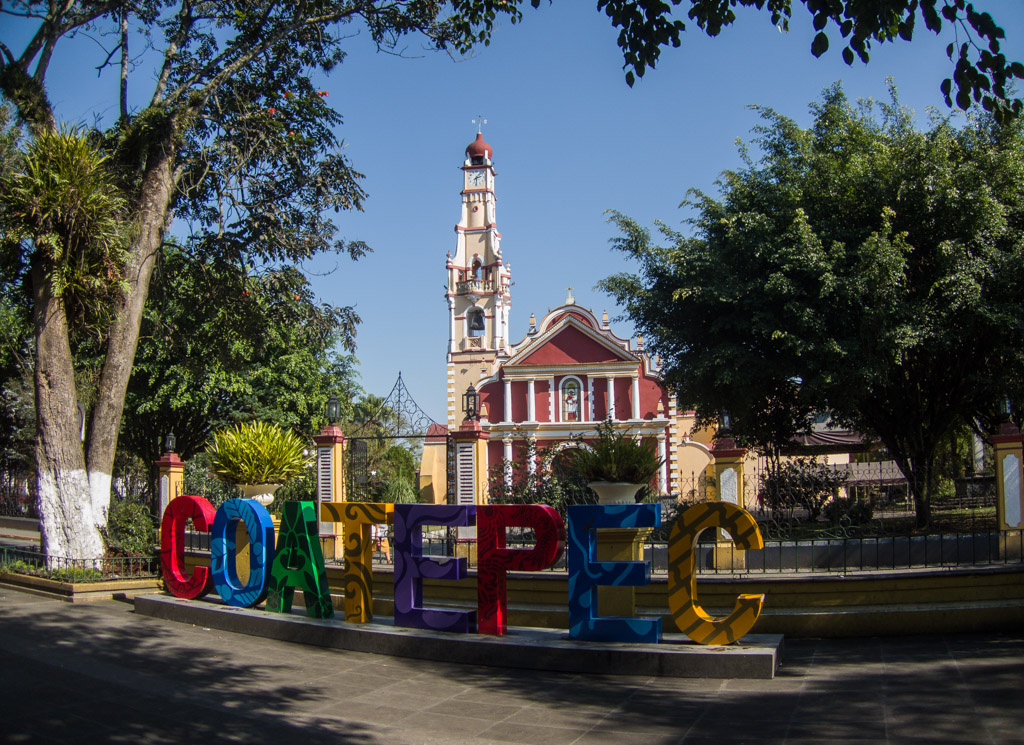 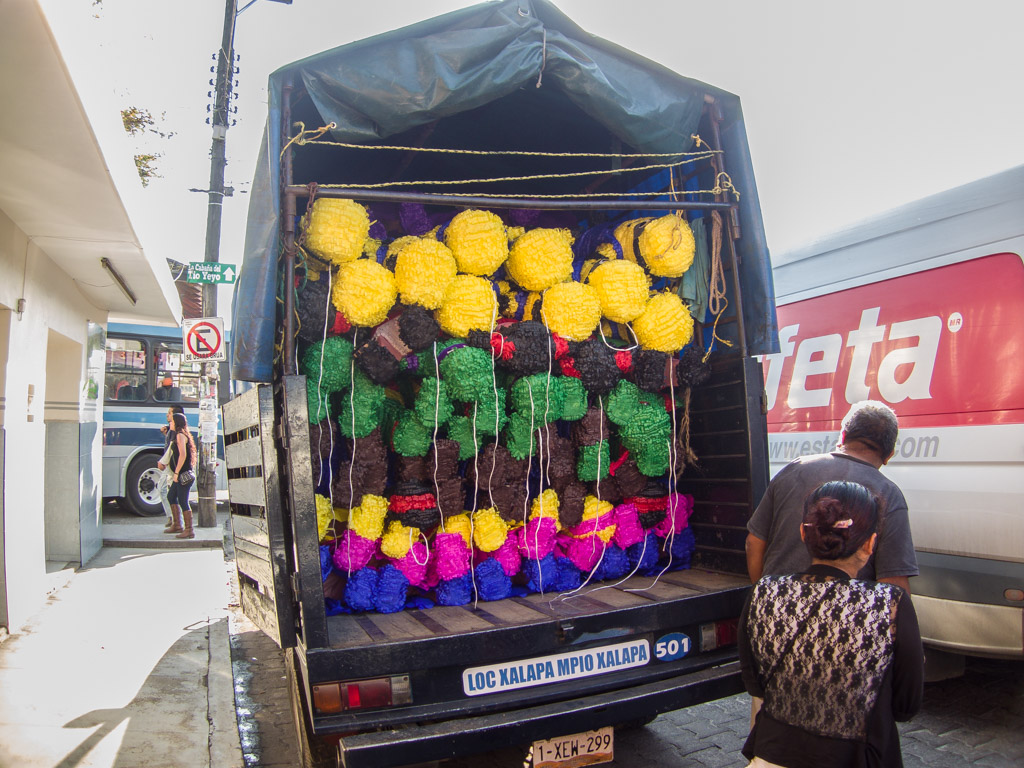 After over 8,000 miles (13,000 kilometers) from California down to Costa Rica and now back up, little things are starting to show their wear:

Also, it’s starting to get hella cold. We ain’t in Costa Rica no more. 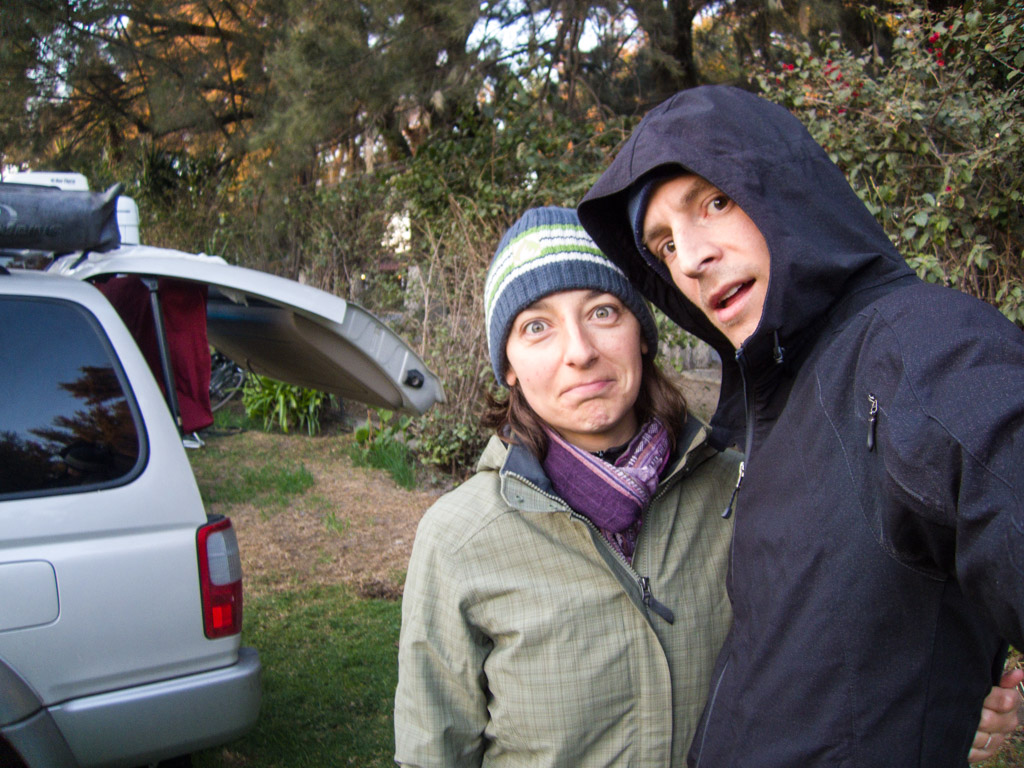 We woke up in the morning without consideration for the fact that Mexico City is situated on a mountain plateau of 7,350 ft (2.2 km above sea level) and it gets really cold at night in January! Travis got up and put his sandals on as usual, then shivered stubbornly as we made breakfast. Only after we sat down to eat did he recognize the serious condition of his frozen feet and capitulated by putting on socks and shoes.

We never planned to go to Mexico City. In fact, Bruno put his foot down and staunchly refused to take us. Reports of never ending traffic, air pollution, costly tolls… Bruno’s always looking out for our bottom line. To control the traffic, certain license plate numbers can’t drive on certain days and pay heavy fines if you’re caught. Thanks to reports from other overlanders, we discovered it’s very easy to leave Bruno at Trailer Park Teotihuacan (dwarfed alongside the RV’s) and catch a 1-hour bus ride to a Mexico City metro stop. Bus cost is about $2 USD each. 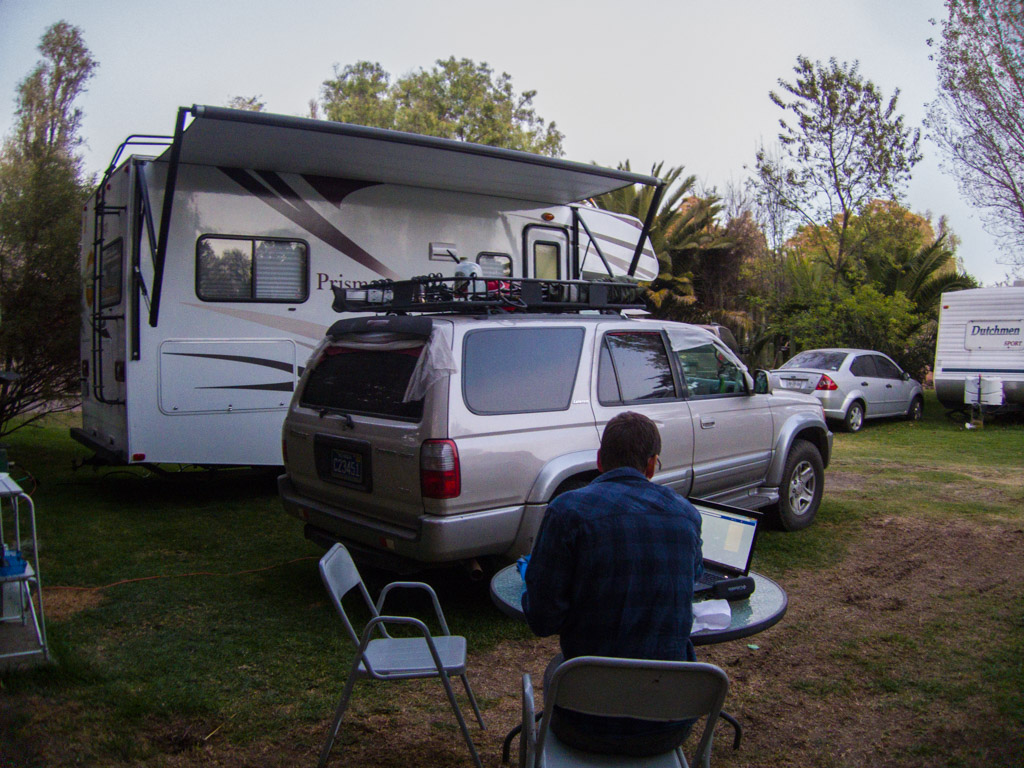 Taking the bus in gives some perspective on life in Mexico City. First on the traffic, and then on the sprawl. The many valleys and hills that ring the city are covered with concrete homes. Some painted, some not. Among our fellow bus commuters were several women prepping for the day ahead. We witnessed two such ladies using metal spoons as eyelash curlers (kind of genius, who needs that fancy guillotine contraption?).

The bus drops you off at a metro station, and from there you head downtown. The Mexico City metro is one of the busiest in the world, transporting approximately 4.5 million people every day. Only Moscow (7.5 million), Tokyo (5.9 million), and New York City (5.1 million) have busier subway systems. 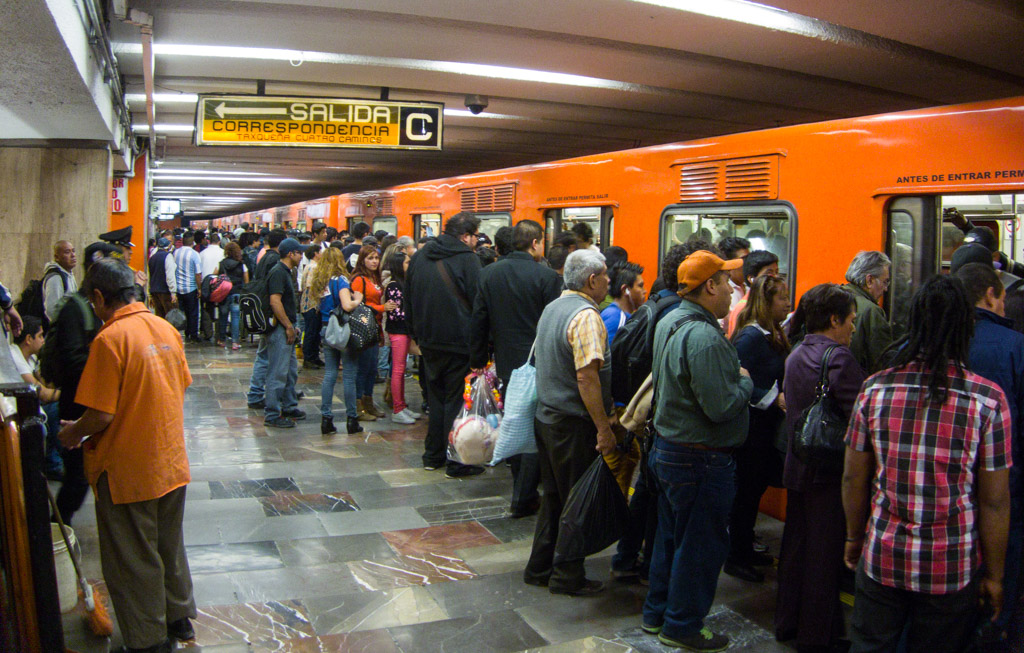 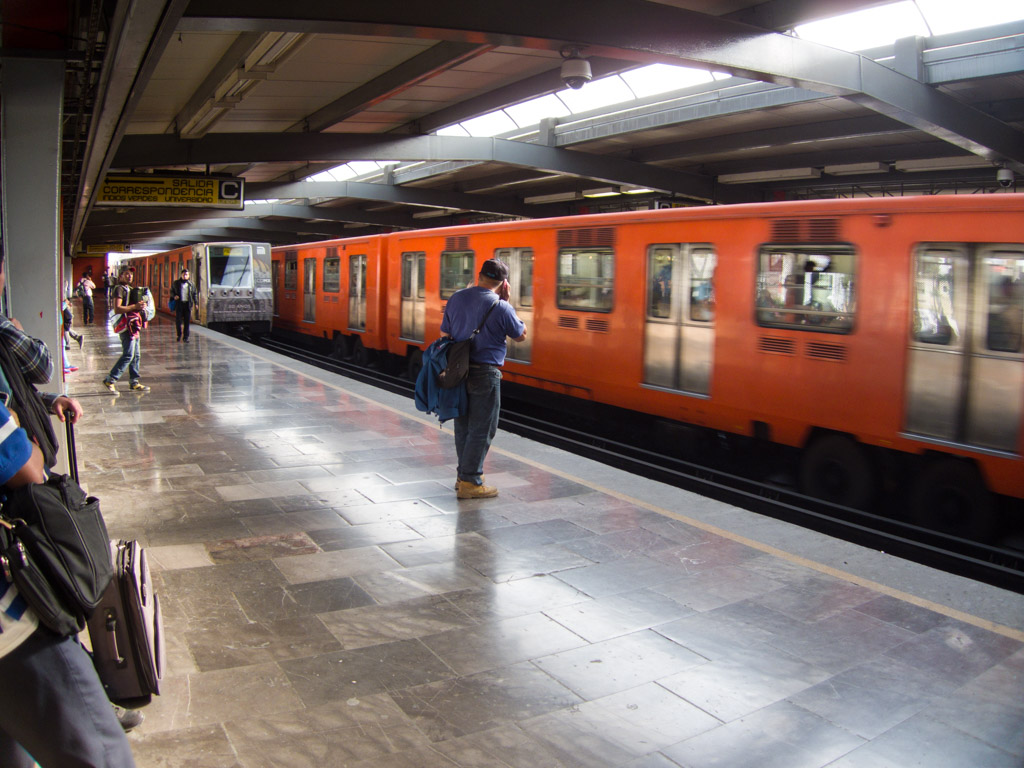 At the Zócalo metro stop, you emerge from underground in front of the Palacio Nacional and the Catedral Metropolitana, the latter being the oldest and largest cathedral in all of Latin America. 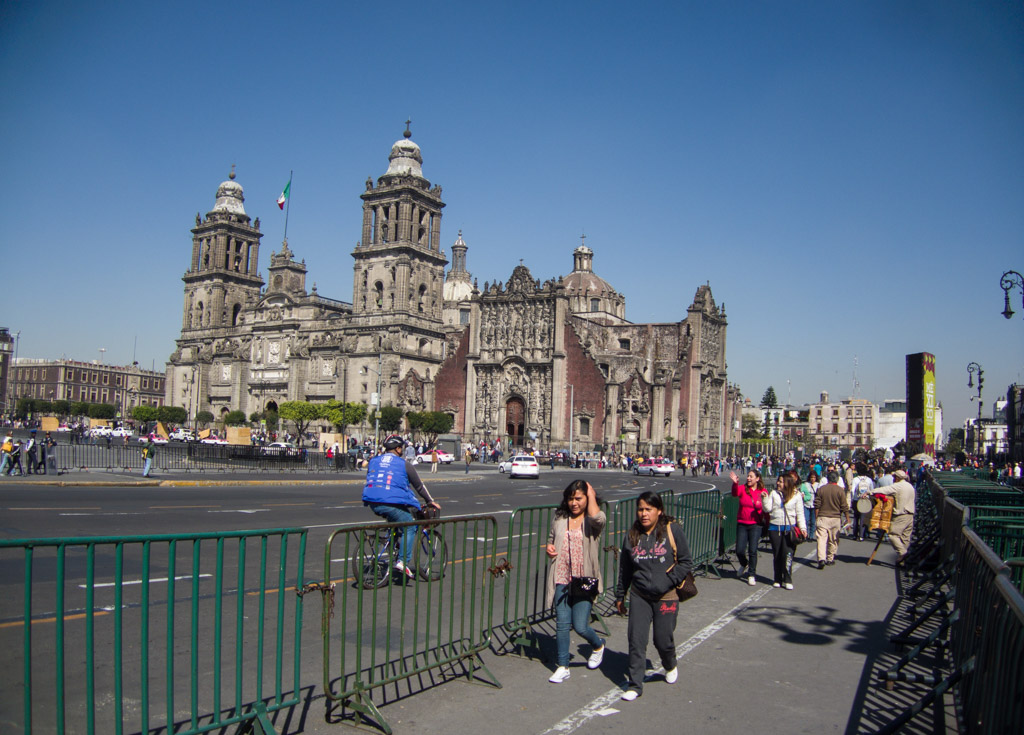 The streets of the Historic District on a Saturday afternoon are overwhelming. The Greater Mexico City population is 21.2 million people, making it the largest metropolitan area in the western hemisphere! 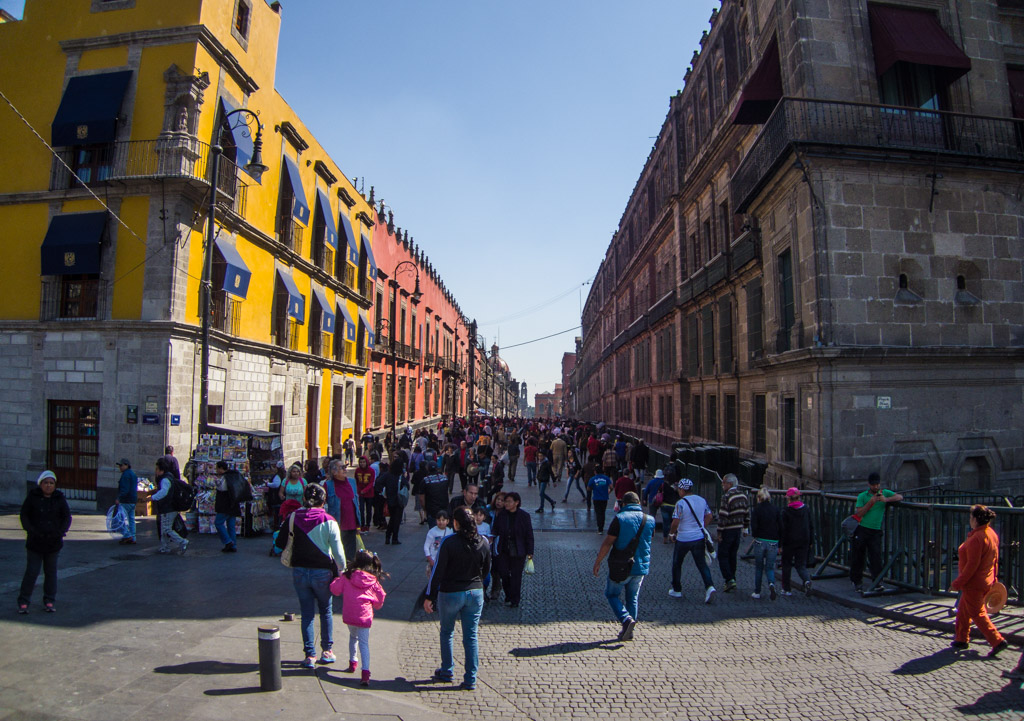 We share the cobblestone streets with our fellow humans. 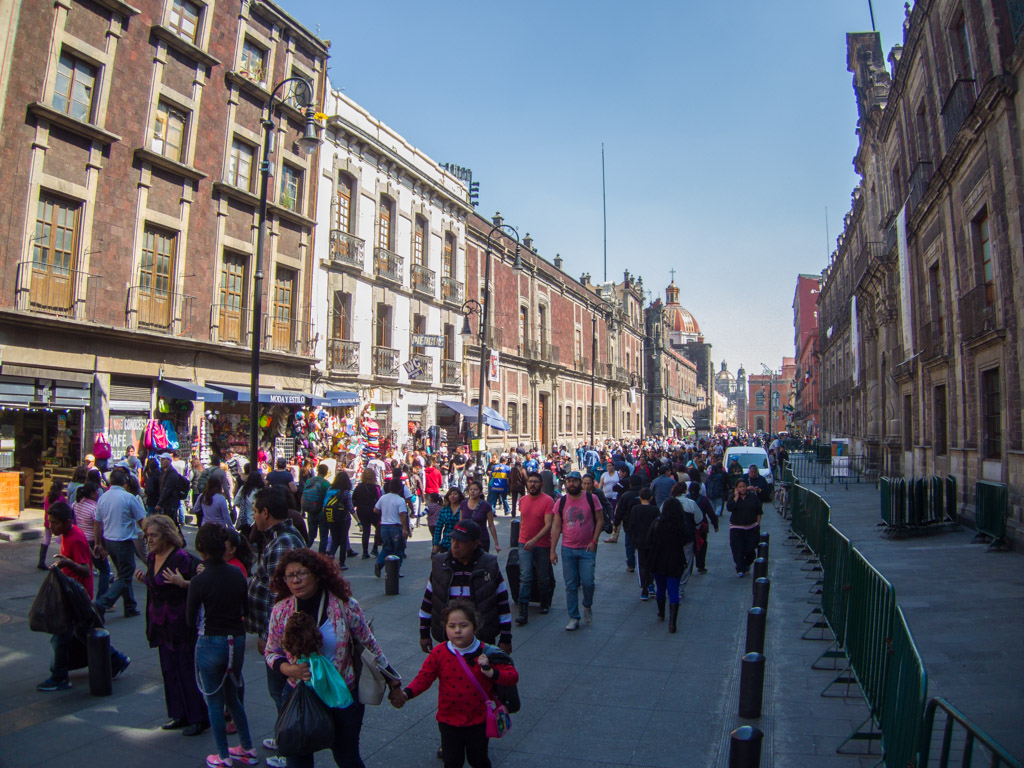 The Palacio Nacional is home to the offices of the President of Mexico and the Federal Treasury. It’s free entry and there is a large internal courtyard. One of the big reasons to go is to see the numerous Diego Rivera murals painted between 1929 and 1951. The detailed murals are spectacular, and Diego does an amazing job painting the history of Mexico in all its splendor, chaos and brutality. 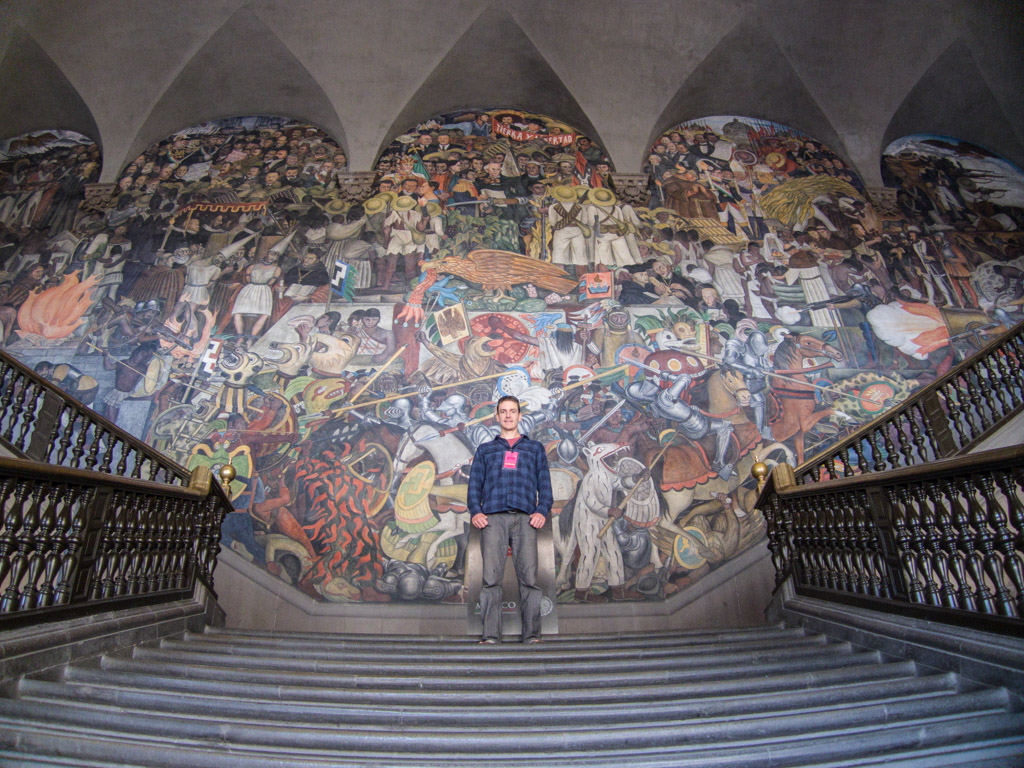 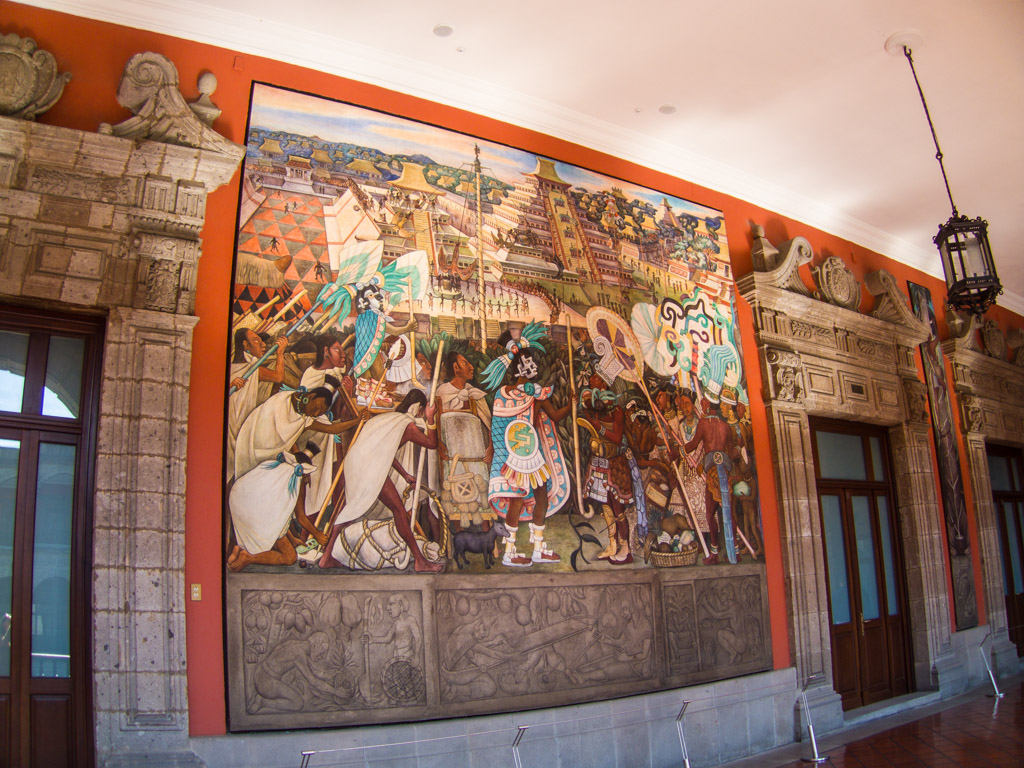 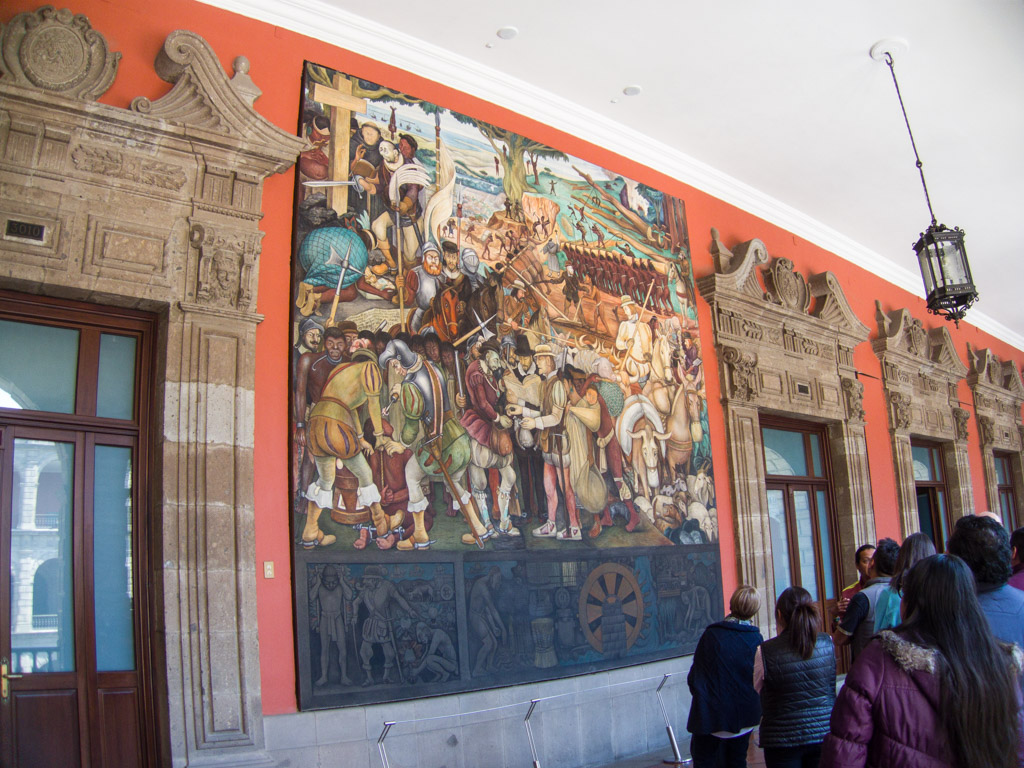 Inside the Palacio Nacional, you’ll find the Museo Nacional de las Culturas (also free) with ancient Aztec and Maya sculptures. Some have an uncanny likeness… 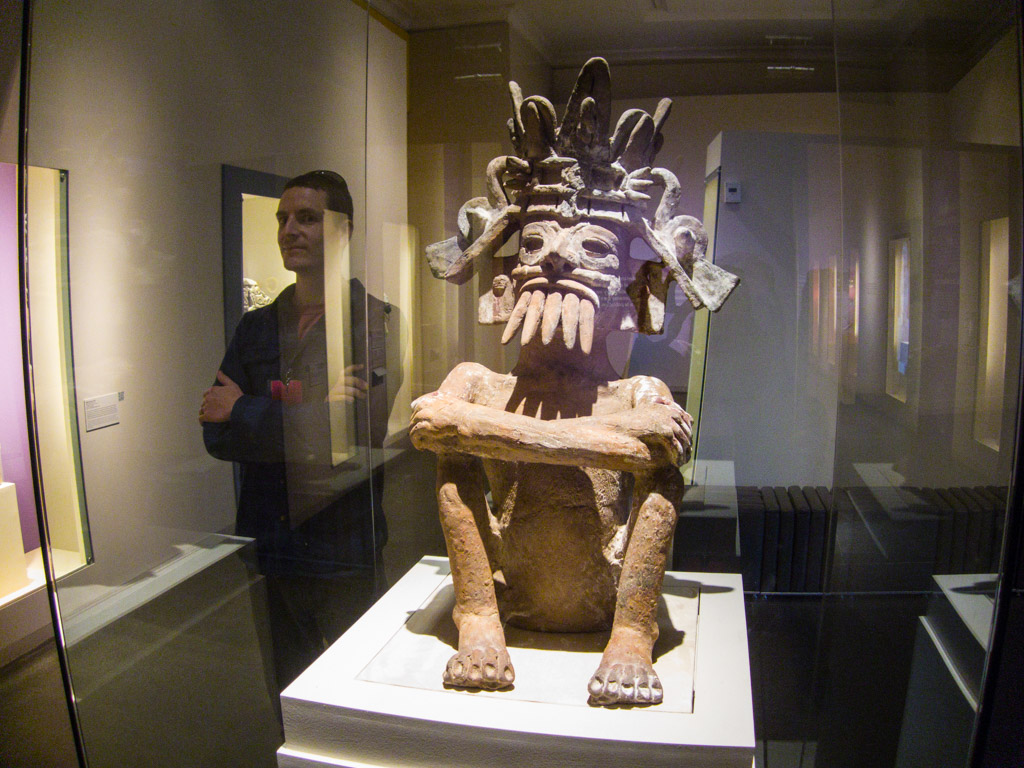 Following Amanda through the streets of Mexico City. She knows how to avoid the sidewalk crowds. 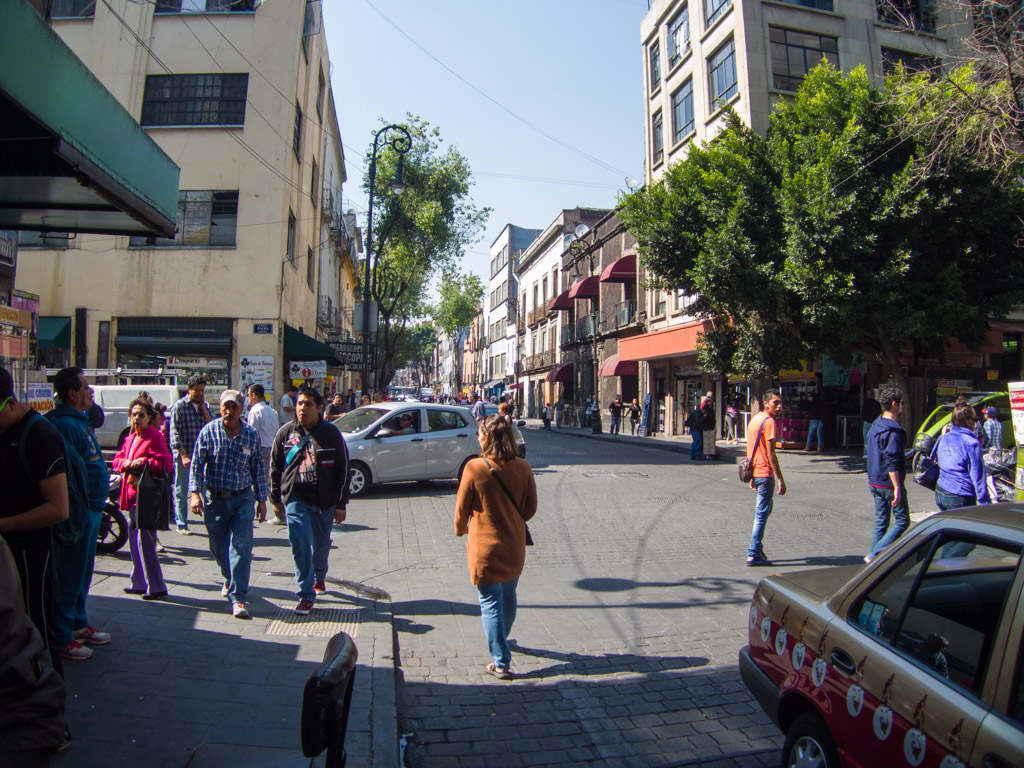 Further on down the Historic District is the Palacio de Bellas Artes (Palace of Fine Arts), built at the east end of Alameda Central Park. This palace is an iconic Mexico City building that hosts exhibitions, theater performances, and the Folkloric Ballet of Mexico. 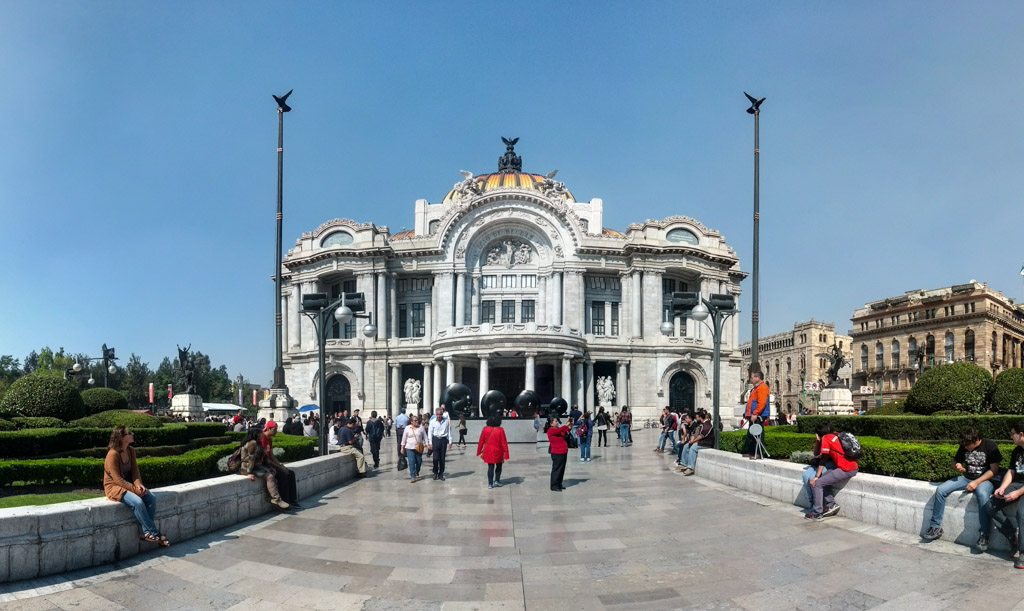 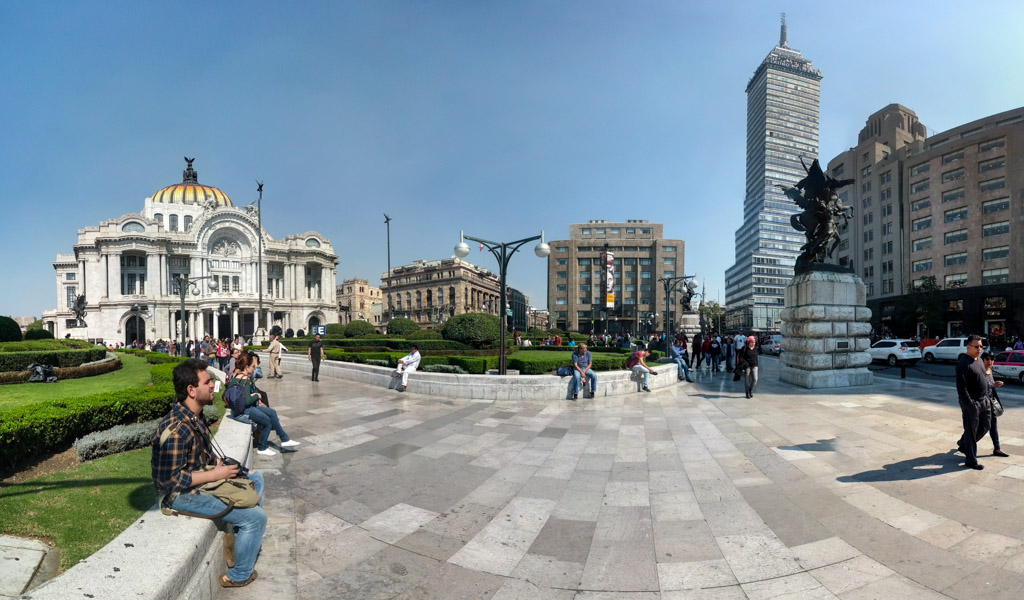 Monumento a la Revolución has a large downtown plaza with spraying water fountains and historical plaques honoring the Mexican Revolution. It was a fun place to spend the afternoon, before returning to dine with Bruno. 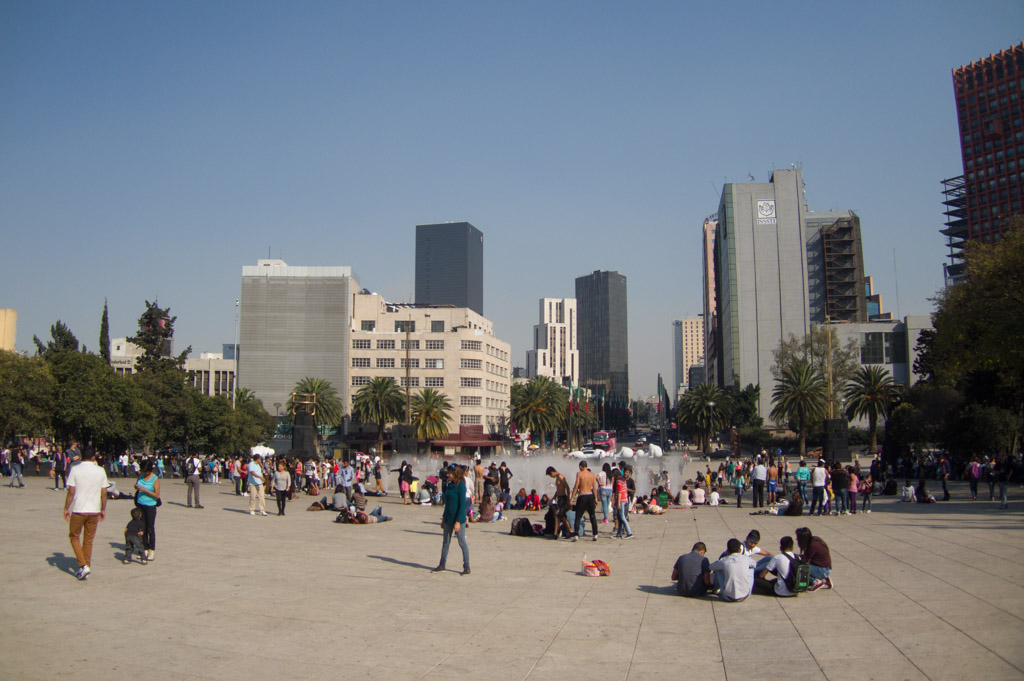 The morning after we left the trailer park with Bruno, we visited the famous ruins just NE of Mexico City: Teotihuacán. At its peak sometime around 500 CE, Teotihuacán had a population of 125,000 or more, making it at least the sixth largest city in the world during this time. Apparently they even had multi-story apartment buildings. The air pollution from Mexico City is clearly visible behind the monstrous Pyramid of the Sun. 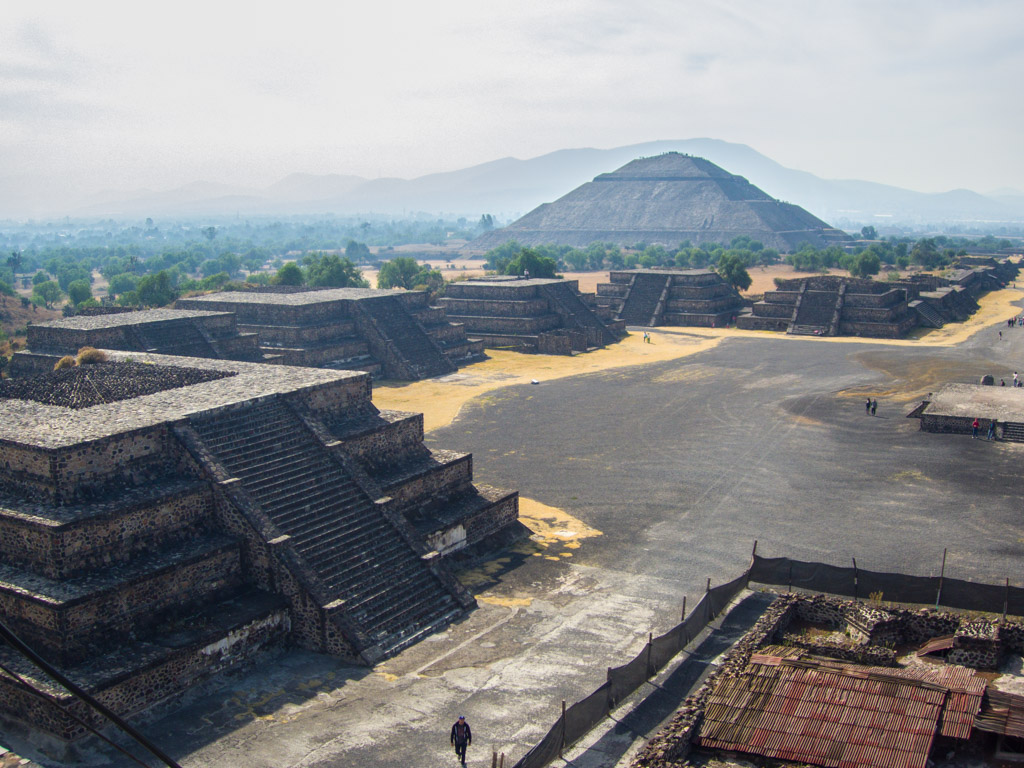 The early history of Teotihuacán is quite mysterious, and the origin of its founders is uncertain. Like all the others, eventually the city became abandoned, and it wasn’t until hundreds of years later that the Aztecs stumbled upon it and their minds were blown. 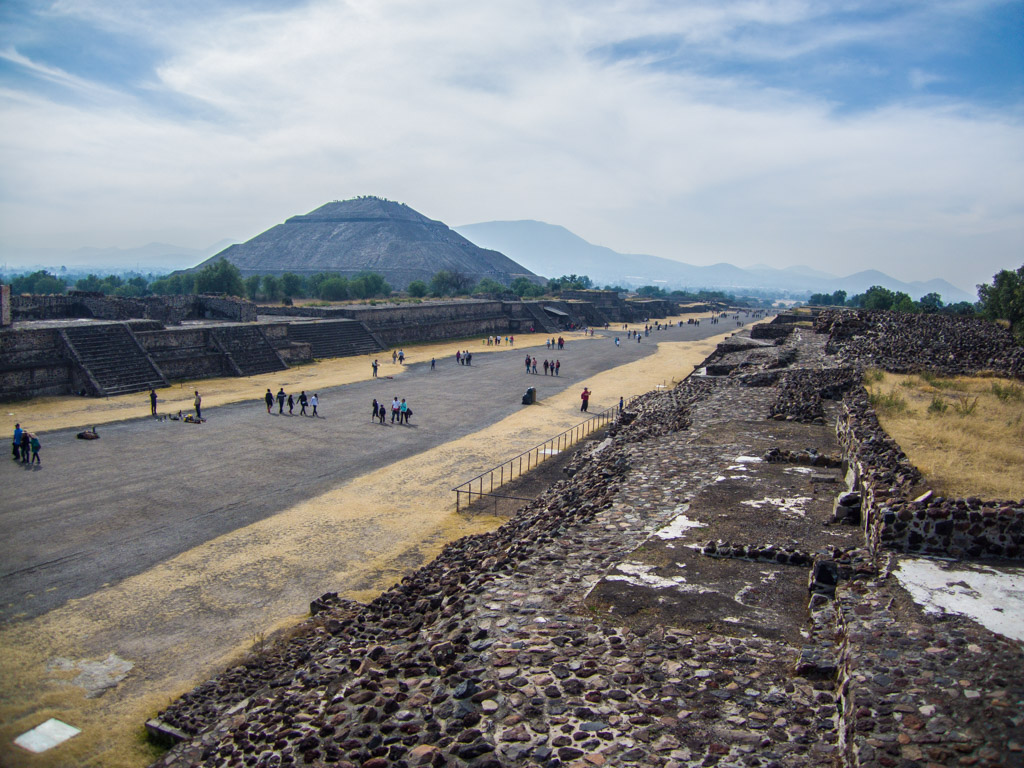 The site’s layout is along a central strip called “Avenue of the Dead”. The Pyramid of the Moon flanks the northern end of the avenue, behind Amanda. There is very little in the way of shade here, an early morning start is recommended. 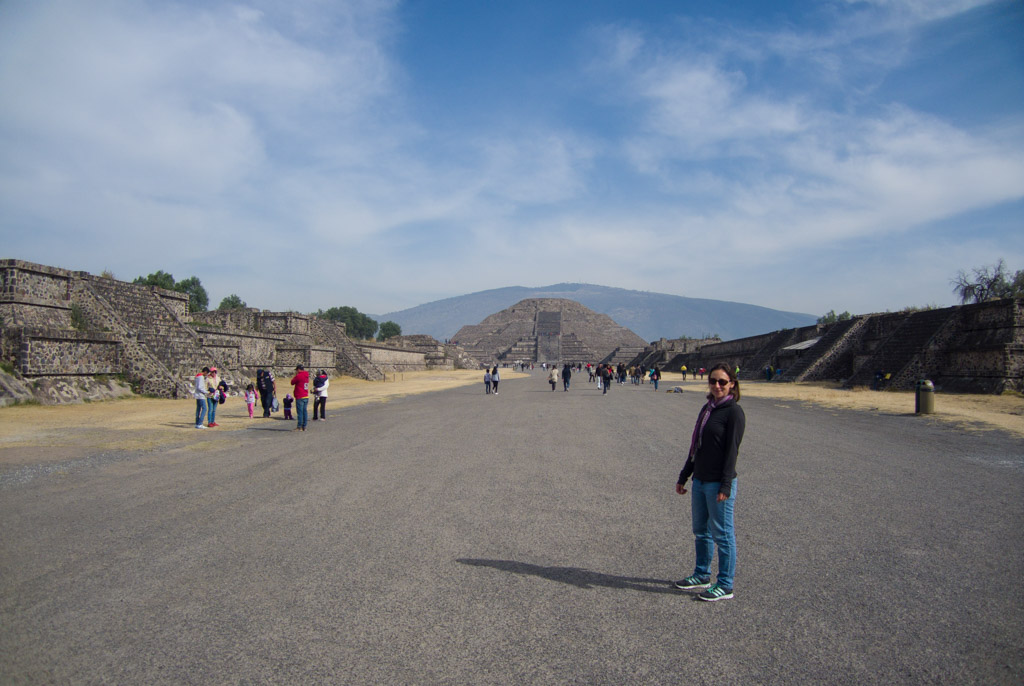 After visiting Teotihuacán, our Mexican sightseeing is essentially over. We hit the road and make a beeline north for the American border. We were able to cover Northern Mexico in all of 4 days. The first night returning to San Miguel de Allende, since it was a convenient stopping point and we really enjoyed ourselves when we were there last April! 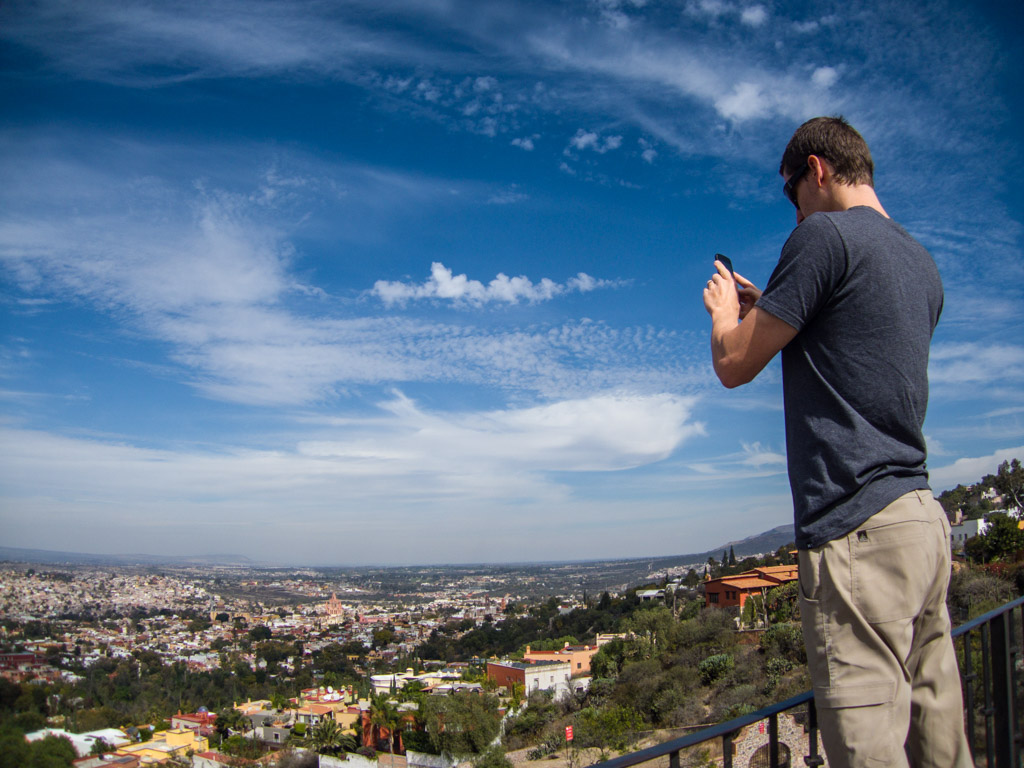 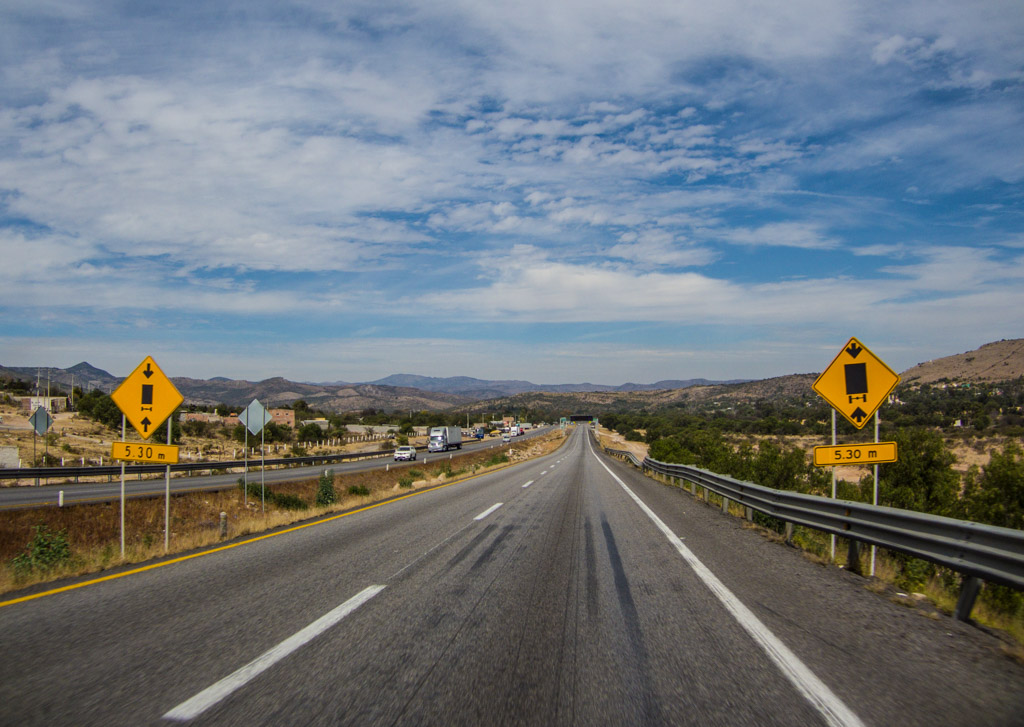 As is recommended by the masses, we stuck to the toll roads in Northern Mexico and didn’t deviate. We camped in the back lot of Las Palmas Midway Inn at Matehuala and stayed in an Airbnb shared room in Monterrey. 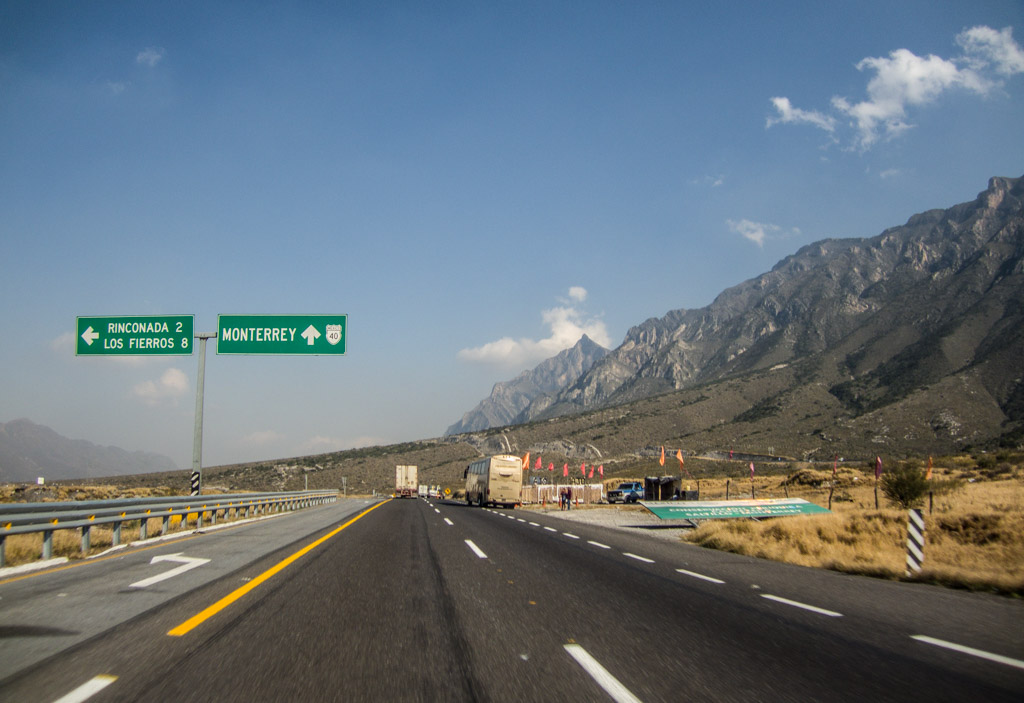 It’s universally accepted that the most dangerous parts of Mexico are along the northern border regions. The great movie Sicario that just came out leaves the impression that all Mexican border towns are complete war zones. But if you stick to the main roads, mind your own business, and travel during daylight hours, there’s a solid 50/50 chance you’ll cross the border just fine like we did.

It’s been 10 months since Bruno’s tires have rolled on US roads and although there’s a faint sense of melancholy leaving Mexico, we’re excited for the next chapter. 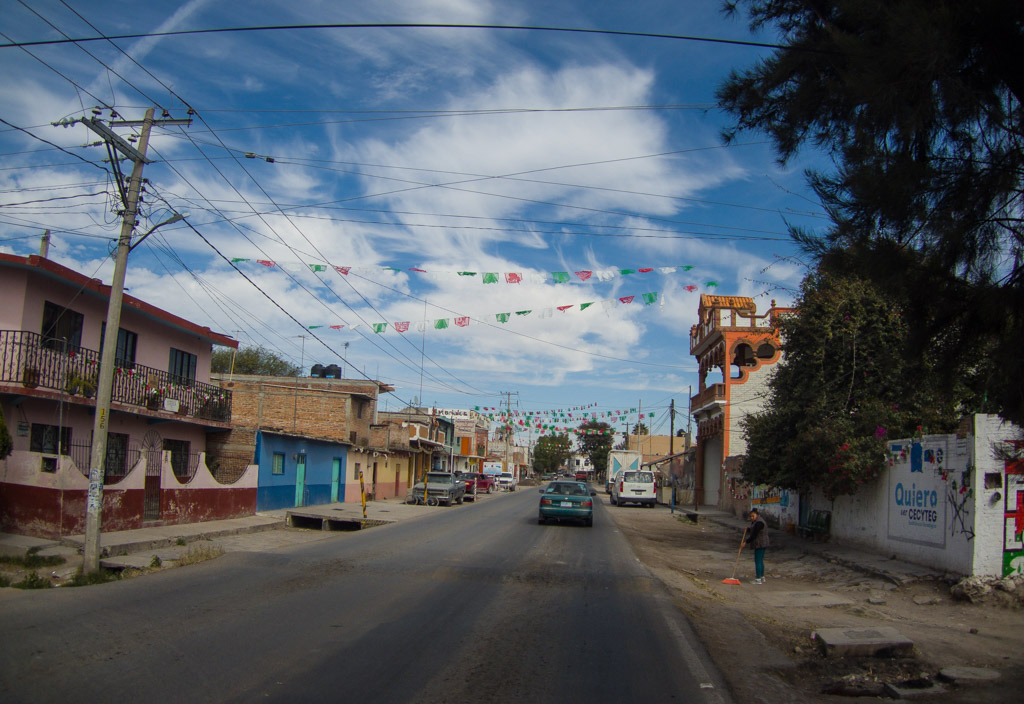